This is part 10 of my Screeps story, you can read the whole story here.

After the respawn in the last post, my rooms have been plodding along nicely. I now have 2 rooms at RC6. This means 2 rooms extracting and selling minerals.

My AI doesn’t make full use of labs yet so instead of leaving minerals alone I extract and sell as much as I can. This is leading to a pretty healthy credits balance which I will be putting to use in the future.

Having 2 high-level rooms is great. My economy is performing pretty well and when I add a third room to the mix it should be lifted to a self-sustaining level quickly.

Way back in part 2 I made some creeps to mine from other rooms I didn’t own. It wasn’t hard with my new AI to re-implement them.

My AI has all the code I need to do this already.

My creep director checks for a few things in a creeps memory before it runs the normal functions. In this case, the goToRoom memory entry is used to specify a room to go to. If this key exists the director runs a separate function instead of the usual function for that creeps action. Once it is in the room it needs to be in normal operations resume and the creep performs its intended job.

It’s time to give my AI some teeth.

It’s time to stop being passive and instead take what I need.

The only barrier for me is their tower. It can destroy one of my creeps before I can reach it. So I need to feed infantry into it until it runs out of energy.

Half of the battle in screeps is observing the way the other players AI is working. My opponents AI has some exploitable flaws.

After sending 2 creeps to their death I had caused a pretty big disruption to their room. They are down to 2 surviving creeps which is affecting their supply situation. No deliveries to spawn or the tower will be a great help to my war effort. 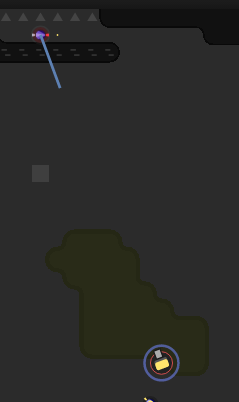