This is part 6 of my Screeps story, you can read the whole story here.

W26N66 is the room directly below my main room. It has 3 energy sources and a utrium mine with extractor already in place.

It also has NPC creeps that guard the room. 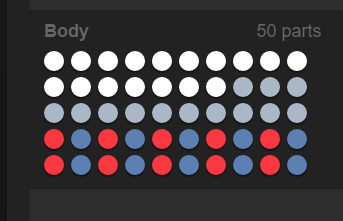 To beat these creeps and take the resources is going to require a new kind of creep.

At RC5 I have 1,800 energy to play with when spawning a creep. Before I design my new creep lets analyse the enemy.

That creep comes out at a cost of 3,120 energy. Which is nearly double what I can spend on a creep. My initial idea of a single creep is not going to work. I’m going to need a small army to take this room.

The first step is a unit to bring the pain. I need to be able to kill them before their friends come and join the fight.

One on one these creeps will most likely loose, but I can code the to hunt in packs. The heal part is there so they can go on longer deployments and hopefully a single pack will kill more than 1 creep.

My only fear is one of cost. Building these creeps is going to affect my energy supply quite a bit especially with my second room not contributing anymore. I don’t want a repeat of the near miss from last time.

The first part of the code for these is to go to the desired exit and wait for the rest of the pack.

One of my creeps died. Its fate was sealed before the second creep made it to the battle. Pathing seemed to get a little messed up with them bouncing off each other trying to get to the same spot.

Pathing definitely needs improving before I send another wave in. On the plus side, the single heal part was able to fully repair the surviving creep before the NPC respawned.

I’m hitting the limits of my code at the moment. My growth rate is down, my creeps make silly decisions and my CPU spikes very high.

I’ve narrowed my problems down a bit but they are at the heart of how my AI works.

The core of the issue is I have no directors. A director would decide on a job for a creep, record it and send it off to do it. When a new job appears the director will either reassign a creep or leave the job in a pile until a creep is free to do it.

There is also very little automation at the higher level. I still manually place buildings, lay the roads, decide which rooms to use. My AI should be able to take this on itself.

Part 7 is going to detail a complete rewrite of my AI.